It helps the deceased move into a new life – determined by their karmic imprint – while providing a foundation for a dignified funeral and post-funeral ceremonies.

Buddhist funeral rites also emphasise the fleeting nature of our existence and help those left behind to develop their understanding, commitment, and compassion on their spiritual journey.

Buddhist funeral customs reflect the culture of the religion in helping to shape thousands of years of Chinese civilisation.

These rituals are an important aspect of life – and of Buddhist funeral services – grounded in concepts such as:

Buddhists, including Chinese Buddhists in Singapore, see death as a transition in the cycle of life, death, and rebirth to achieve enlightenment – according to the principles of samsara and nirvana.

This is why Chinese Buddhist funeral ritual is so important in reinforcing the Buddha’s teachings on impermanence – that nothing lasts forever – which helps to ease the suffering of grieving family and friends.

How Buddhist funeral rites are observed


Chinese Buddhist funeral rites typically include chanting of the Heart Sutra during encoffining, to prepare the soul to accept the death of its current physical body.

The most frequently recited text in Mahayana Buddhism, the Heart Sutra is also one of the most concise – but is regarded as pure wisdom.

The Heart Sutra is deep and subtle, exploring the concept of emptiness of the body, feeling, thought, will, and consciousness. It also refers to “No withering, no death”.


Enlightenment ceremonies are a Buddhist funeral ritual that may continue for days as monks recite the Amitabha Sutra as a contemplation of Amitabha Buddha and the Pure Land.

Like the Heart Sutra, the Amitabha Sutra can be confusing. This is partly because there’re many paths to ultimate realisations – as Buddha taught.

As such, the Pure Land can be perceived as an after-death paradise or as a metaphor and that it exists only in the mind.

Post-funeral Buddhist ceremonies are commonplace as families continue to mourn their loved one.

Chinese Buddhist funeral ritual offerings often continue over 49 days, during which – according to The Tibetan Book of the Dead – the departed goes through an intermediate state (bardo) before their next rebirth.

These 49 days of offerings include:

The 49th-day memorial rite is the culmination of the series of ceremonies and offerings held every seventh day after death. It marks the cessation of rituals as loved ones begin to mourn informally.

The 49th-day funeral ceremony centres on the Ancestral Tablet Moving Ceremony to relocate the tablet to a final resting place – either the family home or a temple. Priests or monks are typically called on lead proceedings, and offerings of food and joss paper are made.

Based on the Buddhist belief that the transition of the soul can take up to 100 days, a 100th-day funeral ceremony is held, which includes monk-led prayers at the columbarium or burial site and joss and food offerings.

A Gong Teck memorial service can also be held 100 days after death, to seek a better rebirth for the deceased.

As well as forming part of 100th-day rituals, a Gong Teck ceremony can also take place on the 49th day and 1 year or 3 years after the funeral. 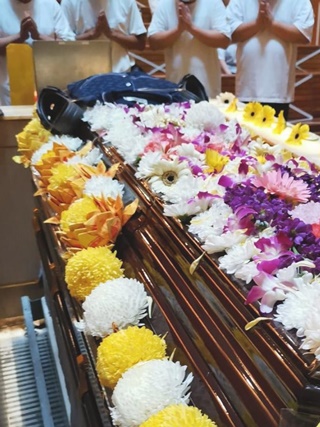 How family members participate in a Buddhist funeral


Buddhist tradition indicates that death should occur in a peaceful environment with family close by. It’s a time when family reflect on the good deeds of the deceased and perform good deeds on their behalf, in the hope it’ll help them in their next reincarnation.

Family members also take part in chanting processions led by monks during encoffining, the funeral, and post-funeral ceremonies. Although monks generally perform Buddhist funeral ceremonies, members of the family can also preside over the funeral service and deliver sermons or eulogies.

The Buddhist funeral process may include a wake, during which the family pay their respects to the deceased and console one another.

It’s likely that some people attending a Buddhist funeral will not be Buddhists themselves, and family members can offer advice to help make it a more meaningful experience for them.

As a simple and solemn religious occasion, a Buddhist funeral is no place for ostentation or shows of wealth like wearing jewellery. All mourners – including non-Buddhists – are expected to act in a quiet and respectful manner.

According to Buddhist funeral dress code, the family will usually wear white clothing while all mourners should avoid wearing brightly-coloured clothes, especially red – the Buddhist colour for joy.

If you’re a non-Buddhist attending a Buddhist funeral, other pointers to bear in mind are: